Posted on April 3, 2013 by sebastianwanguard

With Ruth McMillan and Sandra Griskeviciute ‘Endless However‘ 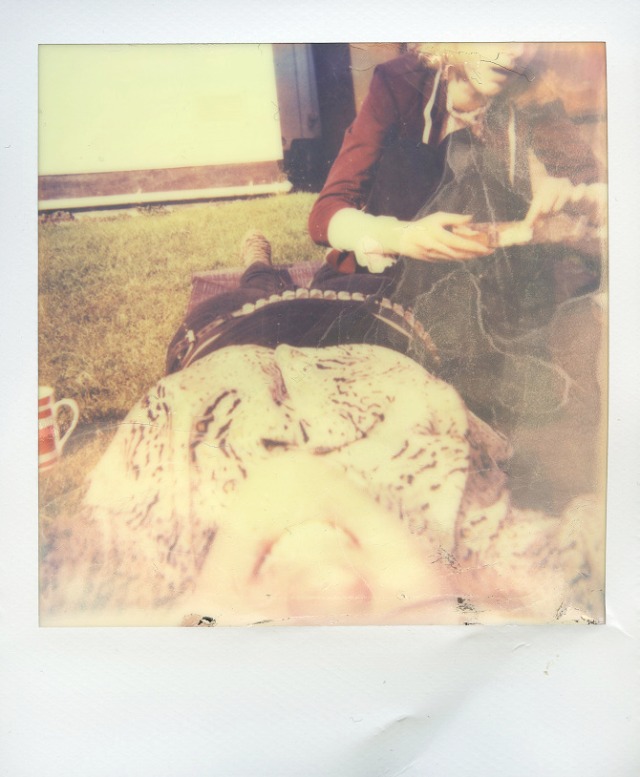 Ruth McMillan and Sandra Griskeviciute are two photographers who have embarked on a walkabout through life….and with an eye for every detail along the way. But the aim is not to follow a given itinerary and record it mechanically, or more correctly, systematically, since their tool of choice is mechanically based rather than digital: the analogue camera. On the contrary, they love getting lost and staying lost because it is life on the move that matters to them. In this they follow a trend that Doomed Gallery is putting out there with the previous shows, Joe Skilton The magic 8 ball, and the Photocopy Club, Xerox and Destroy as well as upcoming shows with Magma collective and Calvin Russel, all of which have some roots in their approach, their aims and their methods in the Situationist movement.
But what defines all of these artists, seen in groups rather than solo form, while all retain their individuality, is the idea of DIY and accessibility. We cannot say it is absolutely new, nor were impressionism or expressionism because all movements if we can still use this term, originate in the trail of some other vision that grew from yet another past …nevertheless, this is not mainstream material, a refreshing jump into the ditch where the viewer is invited to pick and bag, because the art is cheap, but it sure is art.

The story goes that most of these photographers, who don’t stick to the trigger happy club of ‘fb’ pagers and certainly will go to any length to degloss the patina of the perfect photo, have found the apparatus of their art in some attic, a shoe box, a cellar…abandoned by their Gran, the outmoded tools of their parents, the vestiges of a bygone era left behind because it appeared no one would need them again…Wrong! That ‘s the story. While our grand parents are fumbling with the virtual gadgets, while some even get nerdy, their grand children pick up the Polaroid, the compact camera or the vintage SLR, because they want film, they want to feel it as it is. So those new tools are old, salvaged from older generations’ lives, salvaged from oblivion and destruction or worse, from museum status. We are observing a strange reversal of tendencies.
Ruth and Sandra work together. They live it and think it together and separately simultaneously. Sandra bid and won a cheap SLR on ebay and started shooting mostly in black and white. Ruth bought her first compact camera for a few pounds, later getting a tattoo representing it on her arm. She and Sandra share their cameras, they take it in turns and occasionally argue on who is going to take a photo of what. But invariably, the angle is different, that’s what makes it a greater adventure. They exercise their emotional connection to each other as much as to their environment. This is what was coined “Psychogeography” by Guy Debord in as far back as 1955. “ …an approach to geography that emphasizes playfulness and “drifting” around urban environments…” a whole toy box full of playful, inventive strategies for exploring cities…just about anything that takes pedestrians off their predictable paths and jolts them into a new awareness of the urban landscape.”. But this is photographed, and the journey goes on right into the gallery where the public can follow the same path and buy the work of the wall.

Ruth is also a poet. She combines the image that can be torn and reassembled, written upon, painted, graffitied…there is no end to the alterations that will turn a record of a place into a record of the emotion that was felt in that place. Some of the background material was lifted from National Geographic, because it is what her eye spots and what she feels about it that matters. Other pieces are like love letters, others are collages.
Sandra experiments with monochrome, and recently came up with wondrous Polaroid images that have been partially destroyed and have become fuzzy, hazy, or abstracted.
The experiential and the anecdotal come up a lot in the conversation. Some people might point to candid or vernacular photography and it is true that some of their influences have sprung from these corners such as Wolfgang Tillmans and Nan Goldin. Other influences are photographers like Nobuyoshi Araki and Daido Moriyama, quite a different set. That’s to show that the work is multi facetted and that we cannot find a way to pigeonhole it as it was the case up to the era of postmodernism. Thereafter, all was a defiance to any new ‘ism’. What has been regarded as the age of the baroque universe of random signs is kicking in. But we realise as we look at the work that there is nothing random about it, and that what catalyses it is emotive content. The pictures are popping up as Ruth says. They grow organically and for that they need the right tools. A pixel does not carry the atmosphere of the moment in the same way. It seems to miss out on the sense of touch, smell, place…So why not using film to get the chemistry going again?
Because it is about going beyond the saturation point of the ubiquitous gratuitous image upload. A return to the sensual involvement of the artist.

In the process which is most important, there is no guarantee of success, no sure thing. You cannot see the result until it is developed. You work with your gut feeling, in the dark. And this element of risk adds to the fun. The images thus regain an emotional value. Corporeality and emotion are essential to this form of art.
And we feel it as we look at the work.

Promotes great Art, consultant and mediator.
View all posts by sebastianwanguard →
This entry was posted in Events, Performances,spectacles. Bookmark the permalink.

The latest news on WordPress.com and the WordPress community.

As I See It

the world through my eyes

Centring on the Periphery

A group of artists working in various mediums that share a similar concern with the Peripheral.

Through the loop hole...

Supporting Artists who exploit photography in their Practice