Posted on March 4, 2014 by sebastianwanguard

“From the land to the water, from the water through the river, we are Charon. From ancient rituals to our contemporary cities, we are Charon. Innermind performance is exploring the human circle/cycle of life. From its onset in the water, it traverses nature and arrives in the modern world, the city. The travellers  move up the river from the water to the city. This path is comparable to the itinerary leading our species  from the primitive world to the modern one. The journey questions the two societies; one based on mythology and spiritualism and the other on our actual pragmatic presence in this world. Cities, objects, people and random characters from daily life, our routine, are projected in a ritualistic way. The aesthetic of the performance is based on the human world of dreams and the subconscious. The countries were: UK: lee River, Turkey: Capadoccia, Brazil/Peru: Amazonia, Dominican Republic: Carnival de La vega Brazil: Sao Paulo.”

The shroud of Charon 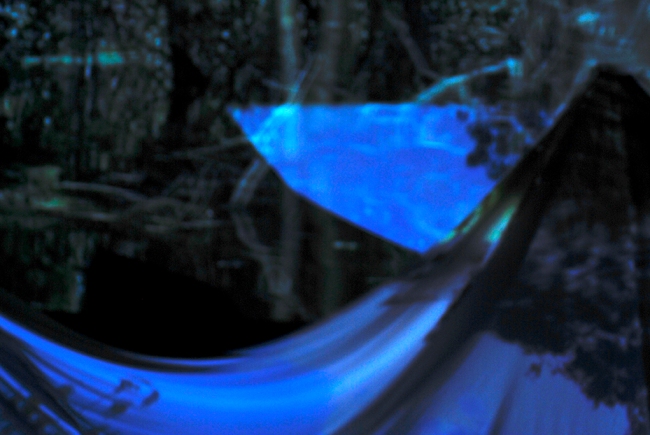 On the stage, a pile of white fabric was left, as if unattended. Two figures entered and changed the face of our expectation as darkness fell suddenly replaced by the dislocation of a moving image.It was as if the screen was split in two distinct parts. And this was in itself an ironic incidence, the inevitability of physical poetry, the theme of the performance alluding to the journey between two lands, two states of being, sang by many poets, Ovid, Virgil, Dante Alighieri,  Francois Villon, Goethe…

The lose half became animated by two ghostly mermaids while images projected on the flat plane lost their definition, caught in the motion generated by two bodies interacting with light, space and one another, appealing henceforth to the unconscious folds of our imagination, thus bringing the audience to the edge of semi conscious participation. Yuri Pirondi held the projector pointed at the breathing fabric, Ines von Bonhorst and Amrit Douque held one corner at opposite ends lifting the sheet that would transform into a cloud, then a wave, then a sail, catching glimpses of scenes from a series of movies also realised by Ines and Yuri during their travels through England, Turkey, the Dominican Republic and South America. 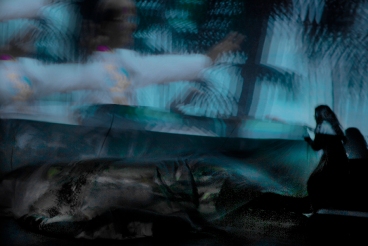 The dancers, keepers of a language in perpetual motion were clad in white robes and their face shone in the intermittent light like flour masks. Their persona echoed those of ancient plays and the sad burlesque presence of the mime. Perhaps we are all Charon in the sense that we, as guides to the self through the perils of existence, also invoke the caricature of our fears to fend off evil within and without. Here, on stage, the characters were mapping an ancient initiatic rite on the flux of a distended skin, one Charon, also known as dispater, the dystopia of paternal omnipresence, the other, silhouetted in the penumbra of a distant corner, may have been Tuchulcha, one of his/her assistants and alter egos, or Moira, goddess of fate echoing the genial ‘conduction’ of the psychopomp, both ethereal and terrifying medusas slowly drawing the veil upon the deep, and those who await passage in the afterlife. 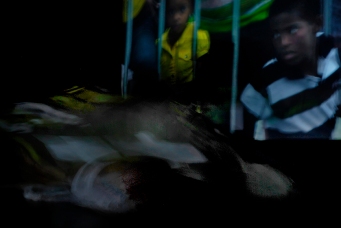 But this would not have been possible without the beholder of the light, or rather he who captured and redirected it, a promethean shadow man working en coulisse so to speak, although he manoeuvred in the recess of the front stage right before our eyes, his face turned away from us, his black clothes in direct opposition to the pale skeletal features of the two protagonists. Furthermore none would have moved, and all would have remained static, as if turned to stone, had it not been for the musicians Mauricio Velasierra and Heidi Heidelberg, who like Orpheus long before them, charmed the demons of immutability.  We could paint those figures struggling with the elements, whose ancestry adorned many a vase, and the walls of tombs.  Like gods lost in the tempest of a cosmos on the verge of crystallisation, the two performers seemed to uphold the palimpsest of earthly life before or may be inside the collective mind’s eye. One could have imagined a sun sinking behind the back curtain, but this was not a drama or an opera.

No words were spoken, and this fact made an emphasis on all other sounds produced during the act; the sound of active corporeal interaction with the environment.  This means, the sound of inspiration and expiration, the sound of notes, the sound of feet walking on the floor, the sound of people shuffling, coming and going, the sound of matter colliding with matter, reverberating in the grotto of experience, mixing like living cells. We must talk of it as an act as this was an instance of pure theatricality where text was subdued and inferred but never used, replaced instead by gestures, breathing, music, light, entanglement and spatiality. 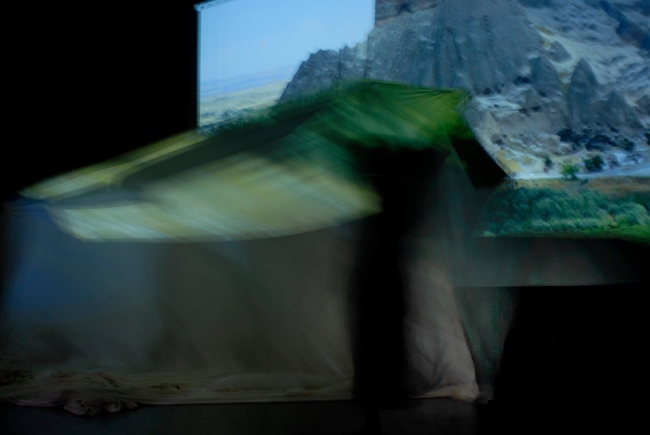 The words of Antonin Artaud once again were evoked. “Poetry is a dissociating and anarchic force which through analogy, associations and imagery, thrives on the destruction of known relationships.”… “In our present state of degeneration it is through the skin that metaphysics must be made to re-enter our minds.” (The Theatre and its Double.). 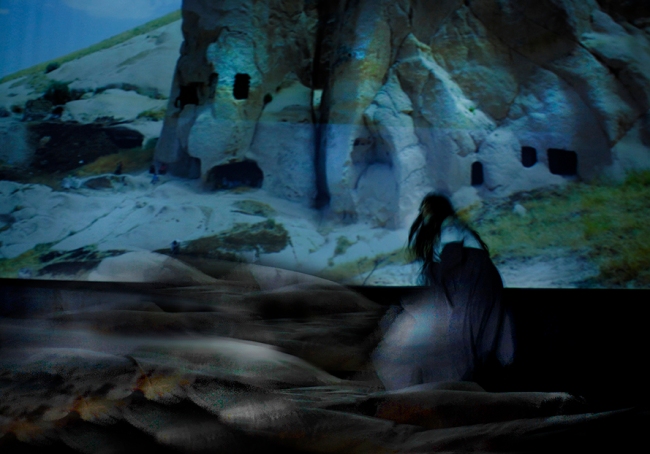 One of the most crucial moments unfolded as a penultimate occurrence, bringing the exit unexpectedly. The drape was lifted suddenly as if a giant had blown into it and prompted by this upward surge, the two Charon ran towards the crowd sitting in the darkness covering half of the audience with the surface glimmering with unreadable signs, broken language of our times in the waters of the Styx. This was a coup, like a door slammed shut, or a flash of light through a window. The film still played, and I wondered if some of the members of the public looked up to try and decipher the riddles as the sheet slid swiftly above them, at once pulling one veil off and bringing the sleepers out of another dream.

Promotes great Art, consultant and mediator.
View all posts by sebastianwanguard →
This entry was posted in Events, Performances,spectacles. Bookmark the permalink.

The latest news on WordPress.com and the WordPress community.

As I See It

the world through my eyes

Centring on the Periphery

A group of artists working in various mediums that share a similar concern with the Peripheral.

Through the loop hole...

Supporting Artists who exploit photography in their Practice